“I succeeded by saying what everyone else is thinking.” Probably one of the best ways to describe the late Joan Rivers was gutsy. The snarky comedienne best known for her intense fashion critiques of celebrities before Hollywood red carpet events passed away on September 4, 2014 in New York City. 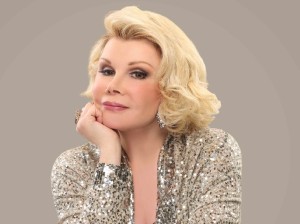 Joan Alexandra Molinksky, better known by her stage name Joan Rivers, was a groundbreaking American actress, comedian, writer, producer, television host, and reality television star. Rivers first came to notoriety as a guest on The Tonight Show. There she debuted her unique comedic style of self-deprecation and relentlessly poking fun at celebrities. She launched a rival show called The Late Show with Joan Rivers making her the first woman to host her own talk show on network television. She later went on to host a successful daytime show, The Joan Rivers Show from 1989 to 1993, which won her a Daytime Emmy for Outstanding Talk Show Host. Rivers died following serious complications, including cardiac arrest, during an elective procedure on her vocal cords at a clinic on the Upper East Side of Manhattan. “She passed peacefully at 1:17 p.m. surrounded by family and close friends,” Melissa Rivers said in a written statement.

The 81 year old’s funeral was nothing short of a star studded red carpet event just as Rivers wished. In her 2012 book, I Hate Everyone … Starting With Me, Rivers penned a 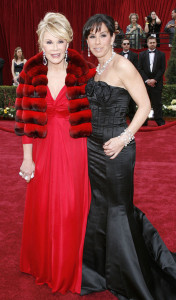 paragraph that was directed only at her daughter, Melissa specially stating her funeral plans and that she wanted to go out in style. She told her daughter that she wanted a huge affair with publicists and paparazzi, a real Hollywood movie scene. She also jokingly added that she wanted Meryl Streep to attend and to be sobbing in five different accents. Additionally she wrote that she wanted a wind machine so that even while she lay in her casket her hair could be blowing just like Beyonce’s.

Joan Rivers will surely be missed by a slew of family, friends, and fans although there are some who may not feel the same way. During her 55-year career as a comedian, her satirical humor was both praised and criticized as being truthful, yet too personal, insensitive and very often abrasive. Yet even after receiving many criticisms Rivers never apologized for anything and always stood by what she had said. Completely open and honest, no matter how you felt about her you knew what you were going to get with Joan and in the end that’s what made her great.