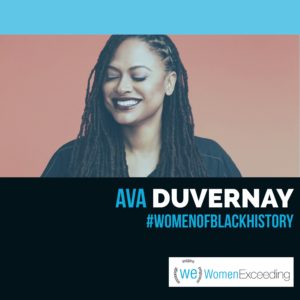 Ava DuVernay is an American film producer, screenwriter, film marketer, film distributor and award winning film director. DuVernay is the first African America female director to be nominated for a Golden Globe Award and the first African American female director to have her film nominated for the Academy Award for Best Picture. As a journalist and film maker, DuVernay advocates for Black empowerment and representation in the media. In 2017, DuVernay became the first black woman nominated for an Academy Award for Best Documentary Feature, for her film 13th, a film which explores the intersectionality of race, justice and mass incarceration in the United States. Of her craft she says, ““I love making films. I’m happiest when I’m doing it. For me, the fear is not being able to make the next thing and not being able, as a woman filmmaker and as a filmmaker of color, to put together the resources to make another thing.” #WOMENOFBLACKHISTORY #BLACKHISTORYMONTH