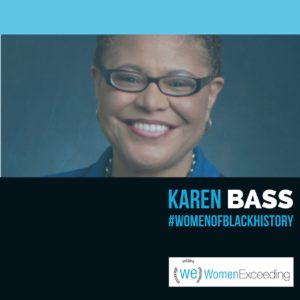 Karen Bass is an American Democratic Politician who represents California’s 37th congressional district in the United States House of Representatives. Bass represented Speaker of the California State Assembly from 2008–2010 and was the second woman and third African American to do so. Bass studied philosophy at San Diego State University and then earned a B.S. in health sciences from California State University, Dominguez Hills Bass worked as a physician assistant and as a clinical instructor at the USC Keck School of Medicine Physician Assistant Program. Bass entered the political arena when she founded Community Coalition, an organization in South Los Angeles. In addition to her leadership of California African Americans for Obama and her post on Barack Obama’s national African American Leadership Council, Bass served as a California Co-chair of Obama’s 2008 presidential campaign. Bass is a very strong supporter of gun control, foreign affairs working with our NATO allies and within the United Nations, and a human rights advocate. “Technology alone isn’t enough. To really get the money shots, it’s down to being in the right place at the right time.” – Karen Bass #WOMENOFBLACKHISTORY #BLACKHISTORYMONTH