Loretta Lynch is an American attorney who served as the 83rd Attorney General of the United States. She was appointed by President Barack Obama in 2015 making her the first African-American woman and the second African-American to hold the position. Lunch has held the position for United States Attorney for the Eastern District of New York under both the Clinton administration and also served on the board of the Federal Reserve Bank of New York. The Harvard and Harvard Law Graduate lead the civil rights investigation into the death of Eric Garner. In response to civil unrest and addressing one of her main priorities, Lynch launched a “Community Policing Tour,” program. “Let us not act out of fear and misunderstanding, but out of the values of inclusion, diversity, and regard for all that make our country great.” – Loretta Lynch #WOMENOFBLACKHISTORY #BLACKHISTORYMONTH 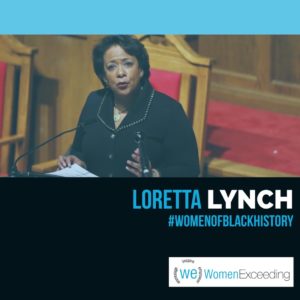