Rosalind Brewer is an American businesswoman who is the COO of Starbucks and the former President and CEO of Sam’s Club, a division of Wal-Mart Stores Inc. Brewer is the first woman and the first African-American to fill the role of CEO at one of Wal-Mart Stores’ divisions. Brewer has earned degrees from Spelman College, University of Chicago Booth School of Business and attended an advanced management program at The Wharton School of the University of Pennsylvania. Brewer had a 22-year career at Kimberly-Clark Corporation, starting out as a scientist, she eventually advanced to president of the Global Nonwovens Sector in 2004. She began her career with Wal-Mart in 2005. While with Wal-Mart, she focused on health and wellness by doubling the amount of organic products offered at Sam’s Clubs. In 2013, Brewer was named one of the World’s 100 Most Powerful Women by Forbes. The magazine also named her among the Most Powerful Black Women of 2013. Additionally, Working Mother named her one of the Most Powerful Working Moms of 2013. She has been honored by Fortune magazine as one of the 50 Most Powerful Women in Business. As of 2014, she is listed as the 64th most powerful woman in the world by Forbes. Fortune 500’s Most Powerful Women List of September 15, 2015 issue ranked Brewer 15th. In 2016 she ranked 19th on Fortune’s annual ranking. Brewer also received the Spelman College Legacy of Leadership award. “You can and should set your own limits and clearly articulate them. This takes courage, but it is also liberating and empowering, and often earns you new respect.” – Rosalind Brewer #WOMENOFBLACKHISTORY #BLACKHISTORYMONTH 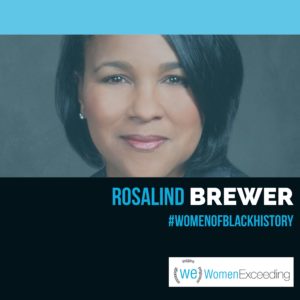