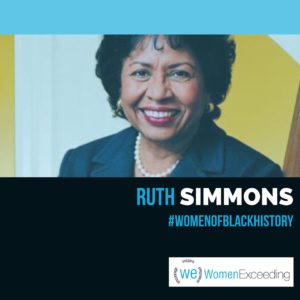 Dr. Ruth Simmons was the first African American Ivy League President, having served as the 18th president of Brown University. Simmons is currently the President of Historically Black University, Prairie View A & M University. Simmons was the first in her sharecropper family to consistently attend middle school. She went on to college, and despite coming close to dropping out, earned a bachelor’s degree from Dillard University and went on to earn her master’s and doctorate from Harvard University. Simmons was a professor at University New Orleans, but her desire to reach minority students pushed her beyond teaching into administration. After serving as Assistant Dean of UNO’s College of Liberal Arts, she moved to Cal State Northridge as an administrative coordinator. She would later serve at University it Southern California, Princeton University and Spelman College. In 1995, Simmons became the first Africam American woman to head a major college or university when she was selected as President of Smith College. In 2009, President Barack Obama’s appointed Simmons to the President’s Commission on White House Fellowships. In 2010, she was awarded the Ellis Island Medal of Honor for her humanitarian efforts. “I came to understand the value of education, not just to enable me to make a good living, but to enable me to make a worthwhile life.” – Dr. Ruth Simmons. #WOMENOFBLACKHISTORY #BLACKHISTORYMONTH