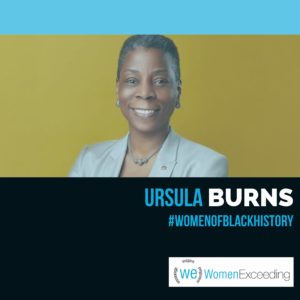 Ursula Burns is an American business educative, currently serving the chairwoman of VEOM. Burns is also senior advisor to Teneo, and a board member of American Express Corporation, Exxon Mobil Corporation, Uber and many more. Burns became the first African American woman CEO of a Fortune 500 company in 2009 when she became CEO of Xerox. In 2014, Forbes rated her the 22nd most powerful woman in the world. Burns has a Bachelors of Science degree from NYU, a Master’s of Science degree from Columbia University and several honorary degrees from UPENN, Howard University, Xavier University to name a few. In 1980, Burns joined XEROX as a summer intern. 29 years later, she was named CEO. This same year, President Barack Obama’s appointee Burns to help lead the White House National STEM program. “I realized I was more convincing to myself and to the people who were listening when I actually said what I bought, versus what I thought people wanted to hear me say.” – Ursula Burns #WOMENOFBLACKHISTORY #BLACKHISTORYMONTH