Yeah Girl, Me Too 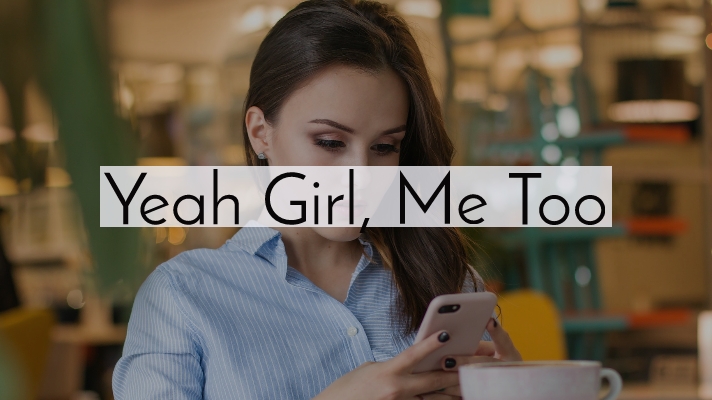 I am envious of the black woman in the picture that society paints. Well, I am envious of one characteristic. She is outspoken and doesn’t take any mess from anyone, especially men.

My line sister, Chelbi, and I give each other pep talks about what we are and are not going to accept from men. (As I typed that sentence, I realized that this post may make me look like a punk, but oh well.) We send each other screenshots of conversations asking for “permission” to be bold in our responses when a man has crossed the line. It was around the time that Drake’s song, “Nice For What”, came out that I was like “NO, enough! I am not holding my tongue anymore.” I didn’t tell a complete lie, but it also was not a complete truth.

We all know my battle with vulnerability (and if you don’t start here). I still feel uncomfortable responding with the witty boldness that I desire to display when a man approaches me completely out of line. In fact, I don’t feel comfortable telling them when they are out of line. (Now, that’s not really exceeding, now is it Christina?) What is even more troubling is that my trouble is not out of fear that they are going to verbally attack me. My concern is that my response may make them feel uncomfortable. Yep, I said it. My concern is that my response to whatever they have done, said, or sent to make me uncomfortable, may make them uncomfortable. Now ladies, I know we thought we knew the definition of insanity (doing the same thing and expecting different results), but I declare that in 2019 it has an additional definition.

I just received a picture from a guy I went on one date with. It was not extreme, but still a lot. What was extreme was the question that followed, “Are you impressed?” I scrunched my face up, unsure of how to respond. The first thing that popped in my head was, “I was shocked.” I didn’t respond with that because I’m sure we had two different interpretations of what I meant by shocked. Also, I did not want this to unleash a series of follow up questions. So I just responded, “yeah.” Wrong response because it prompted what came next, “I can’t wait for you to feel it.” Why is it okay for you to say that? Because no other woman has called him out about it. Neither did I. I’m sorry to the women who come after me.

Now, this is a couple of steps backward, because I was just celebrating calling another guy out, a few weeks before. We had been on one date and were unable to schedule another. I was telling him that the week coming up would be less hectic and he responded, “So you’ve been working hard?” I replied, “lol so hard!” He responded, “you make me hard too lol.” Sir, who raised you? Now, you know, I didn’t say that. I just didn’t respond. Yes, I failed us, ladies, again. I beat myself up about not being bold. So when the opportunity presented itself, I took it. About a week later he texted me and said, “Did you join the CIA? Is that why you went convert?” I took the opportunity and said, “No, to be honest, the ‘you make me hard too’ comment kind of threw me off.” I did it, but clearly, that was an isolated act of boldness.

Why is it when men come at women in a disrespectful or distasteful manner we sometimes think, “what am I putting off to make him come at me like this?” Like girl, it is not you, it is him. Cardi B actually stated it really well. When in a political battle, someone called out her “Twerk” video with City Girls. The initial tweet (from another woman) had a clip of Cardi’s video and said, “In the Era of #metoo, how does this empower women?” Cardi responded, “It says to women that I can wear and not wear whatever I want. Do whatever I want and NO still means NO. So Stephanie chime in..If I twerk and be half naked does that mean I deserve to get raped and molested?”

Cardi made a point. Why is it that any behavior is looked at as attracting or asking for the wrong attention? Why don’t parents teach their little boys to become men that don’t, intentionally or unintentionally, make women feel uncomfortable? Also, why are women taught to be polite and not stir the pot? I am not sure what it is going to take for me to feel comfortable being bold and calling men out on their bullshit. It may be a series of uncomfortable exchanges, but writing this just encouraged me to respond to the latest text… “Yeah, this conversation is headed in a direction that I am not ready to go in.”