Nobody ever really thinks about retirement.

I mean they do but in a far off “that’s a long way away” mindset. But does it ever cross one’s mind that they may end up having to contribute to their grandchildren’s upbringing in a way that will hinder their retirement. Millennials may have to seriously change the way we look at retirement, especially women.

Over the last 30 years, grandparents have taken a more active role in childcare. The number of children cared for by grandparents rose 5 percent in 2008 alone according to the Pew Research Center. Older women ages 58 to 61 are more likely to stop working to care for a grandchild. But also grandparents ages 51 to 54 who help care for grandchildren tend to work 21 percent less than those without. On the flip side, the consequence of raising a grandchild is that the grandparent is forced to work much longer than anticipated.

Grandparents are almost always going to take in their grandchildren when circumstances require it. According to Financial Advisor Magazine, advisors report they are seeing more cases now than in the past of clients raising their children’s children. Let’s face it, grandchildren may be getting in the way and that raises huge problems. There are ways to lower costs but the options may not fare well with the public, like requiring Americans to work longer before they are able to receive benefits. 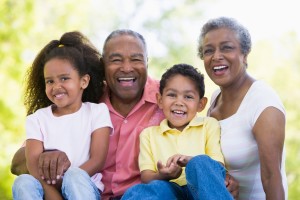 Women who are grandparents are even more likely to retire earlier and the costs for women may be even greater. Since women one average live longer than men, make less and are more likely to retire earlier, their savings have to stretch for a much longer period. According to Bloomberg Business Better child care options and more flexible jobs might make it easier for 60-somethings to stay in the workforce. Until then, any proposals to raise the retirement age would be extra tough on grandmothers.