Is it easy? No, it’s Motherhood.

I used to be fearful of having children. In America, it often is shoved down our throats that once you have a child life changes, the fun ends, your dreams must be put to the side, etc etc. None of that ever sounded appealing to me, but neither did being childless. I’m from NYC so my life completely made sense, being single without kids is hard enough there. I have one friend who has a child in NYC and she used to pay 3k a month for part-time childcare. So I guess late night dinners, sample sales and happy hours would be a thing of the past huh? I was not ready for that s***!

I moved to Berlin, Germany childless and unmarried. For the first few months, I did as everyone in Berlin, does-party ’till the wee hours of the morning, every day. Wake up, walk around with an alcoholic beverage of choice (like Vegas, you can walk around with liquor here), have a cafe outside, work sometimes, and do it all over again. Berlin is truly a city where people live to just enjoy life. Then everything changed. Month 3 living in Berlin I was married. Month 4, I found I was pregnant. I am the poster child for “Life comes at you fast”. LOL 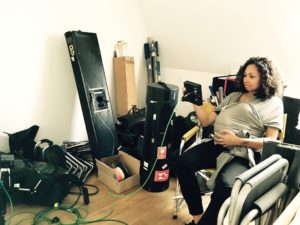 For me, motherhood didn’t slow down my dreams, goals, or work life. It made me want to work harder. It snapped me out of this forever party phase I had been in.  When my son, Hudson was exactly one-month old I started day one of production of my feature film Die Expats, which I co-wrote and co-directed. No, I didn’t plan on directing a movie with a newborn at my teet 24 hours a day, milk spilling from my boobs, creating stains on my shirt as I spoke to actors. When I found out I was pregnant I was already knee deep into the project and the idea was to shoot it while I was pregnant. My producing partner and I thought how cool, this will be total kick ass, an ode to women empowerment, let’s show men women can do it all, get some great photo ops of me with a huge belly and a camera,  all that good stuff. HA. HA. HA. 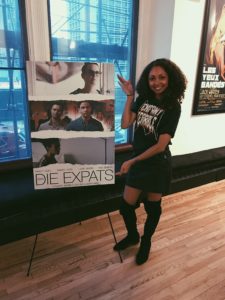 Well we know in motherhood, in Hollywood, and in life in general things rarely go as planned and so there I was, still wearing diapers myself from a traumatic birth experience, still too weak to stand for long periods of time, still traumatized from a natural birth that started in a big ass bathtub with a rope, an 8 pound boy strapped to my chest as I directed a feature film in a foreign country, a country that was my new home. I didn’t mean to do anything out of the ordinary or heroic, but the more I talk to people the more questions I get of how the f***?!

Since the beginning of time women have been extraordinary creatures. I still can’t get over the fact that humans literally grow and develop inside of us for 9 months and then we birth new life. Motherhood is hard as hell, there’s nothing new with that statement and nothing to add to that. I feel like mothers are constantly asked how we do this and that, but really, there is no other option. Work has to be done, the child needs to be cared for, sleep needs to be lost. At times I get frustrated with the question how do I juggle it all? No one ever asks a father how he juggles it all. But mothers, its as if we are meant to be struggling, to not be handling what we are supposed to be doing and then when we do it all-SURPRISE! This again goes back to us being hammered with the idea that all things stop in your old life when you have a kid and things just become hectic, in a bad way. Many people wondered how I would navigate Hollywood and motherhood. Many people tried to count me out when I became pregnant. Being black, the industry boldly tells me I wasn’t supposed to make it, as only 5% of directors are black. Being a woman, I’m not supposed to make it as a director as we make up only 4%.  Already I have to work two times harder than my white male counterparts. But that’s not it, I am also overlooked as a mother because everything is supposed to shut down and stop when we have a baby. The thing that makes us strongest is looked at as weak. I accomplished the “impossible” when I made that film with baby Hudson strapped to me, and I intend to do it over and over again. My skin color, my womanhood, and my motherhood have all prepared me to accomplish the impossible. I know I can, simply because I must. 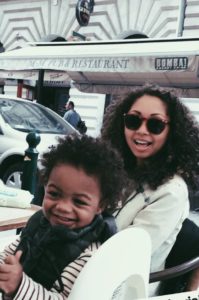 Now Hudson is 22 months old. He goes to a German/English kita (daycare). I’ve found an incredible community of expat mothers who have become my best friends. Has it gotten easier? Sure. Is it easy? No, it’s motherhood. The term easy does not exist. Sure, I have added an extra layer of difficulty by living in a foreign land away from family. It feels impossible during moments when we are all sick, for example. Or when I’m going through mounds of important paperwork in German, which I am better with although still learning.

This summer I will be directing another feature, this time in NYC. Since Hudson has been born I have made several short trips, with and without him, to LA or NYC for work. My last trip, this past March was for 10 days and it was the longest I’d been without him. It was difficult, after day 6 I broke down and cried because I missed him so much. But I have to remind myself, this is the life that I chose. Because I work in the film industry, my counterparts are in LA and that means a 9 hour time difference. Which means I stay up very late, and then wake up very early because, well, child. Hudson also just started daycare at 18 months(typical over here to keep a kid home for at least a year). So I would stay up all night working, then be with him all day. I was exhausted all the time but I just felt like it was life, something I had to do. Now that he goes to kita all day I legit feel like I have all the time in the world, it makes such a difference ahhaa. I have decided though that I don’t want to be away from him for long, so when I go to shoot my film this summer, he once again will be there by my side (Although no longer hanging from my boob as I stopped breastfeeding at 9 months haha)

So, how is it being a mother in a foreign country? It’s hard. It’s exciting. We just came back from a 3 day trip to Budapest last weekend when kita was closed for teacher development. I’m trying to squeeze in a trip to Latvia or Austria before we leave for NYC in June. Hudson’s favorite German word is “Ja”(yes). His best friends are from Australia and Brazil. I’m trying to use this experience to give him a unique, global perspective in life.  I don’t expect to live here forever and I often think that when we do return to the states, it will be such a culture shock even though I grew up there. We no longer will be able to make last minute random trips to Greece or Romania or wherever. Hudson will no longer be automatically exposed to a second language. I’ll no longer have such an international tribe, where my child has friends from every corner of the world. I’ll no longer struggle with translating highly intricate German doctors bills or other important documents. I’ll see other people that look like me daily. There are so many pros and cons, so much to be excited and concerned about. Ultimately, my experience as a working mother in a foreign country has prepared me for life period. I am fearful of nothing, I truly believe I can handle and crush anything that comes my way, and I have Hudson to thank for that.