My Journey to Business School: Down and Dirty (Part 4) 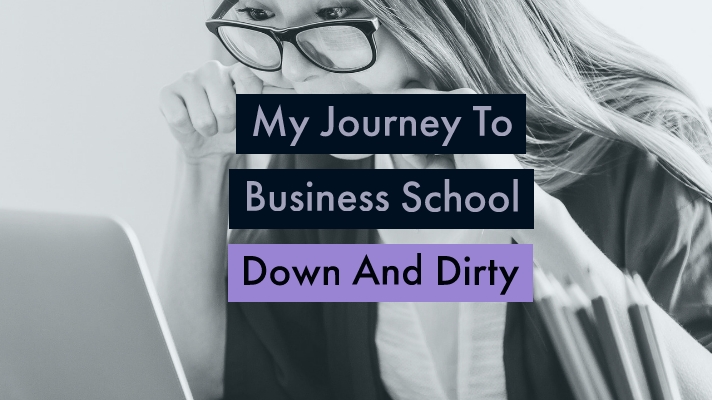 Ok, guys. Here is the good part. I’m going to take you through the story of how I spent 2017, and instead of explaining why (you know why if you’ve read posts 1-3) I will just jump in. Here we go:

On January 17, 2017 I was accepted into MLT. This was the first validating thing that had occurred in my journey to business school. I was excited and felt ready for the challenge. The first challenge was to re-enroll for the GMAT. Why? MLT has a threshold GMAT score of 650 for their fellows. This means that, until you reach 650, they expect you to continue to try to achieve that score at a minimum. The score I achieved from my cold-turkey GMAT in December 2016 was a 640. I was annoyed that I had to pay for another $250 test to gain 10 points, but I knew it was for the best. I immediately purchased a seat for the GMAT for March 1, set out to study for the GMAT, and never looked back.

February was a weird month in that I hadn’t quite figured out how to study well yet. I would go to University of California Berkeley with friends to attempt to immerse myself in a studious environment and just didn’t feel like I was making much progress. A week before my test I took a break and traveled down to Los Angeles to go to a music festival with friends. It was there that my friend Naja told me about Target Test Prep. It’s an online tool that helps you target specific quant skills. I bought the one-week free trial and fell in love with the tool! I was quickly able to target the major weaknesses I’d identified from my test in December and was able to improve my confidence. My issue with the GMAT in December was largely stress. I would get so hung up on solving a problem that I would completely disregard the amount of time I was spending on the problem. That would eventually cause panic, and the rest of the exam would go terribly. Target Test Prep began to give me confidence in the questions asked so I could break them down and get to an answer more quickly.

A couple of days before my exam, I became extremely discouraged about my ability to do well. Given that MLT programming hadn’t officially started, the only person I could think to call was the woman whose name was at the bottom of all the logistical emails. She gave me one of the best pep talks ever and I kept those encouraging words in my head as I approached my test.

I achieved a 690 on my GMAT. I felt this was quite a feat because I honestly still had not found my groove with studying. I think the difference came from not feeling as stressed during the test due to a week using target test prep. I was on my way!

March was also when I finally met my MLT class! I was able to meet a few of my cohort mates at a small brunch in San Francisco and met the rest of MLT at the first semester at Duke University in Duham, NC. (Now might be a good time to explain the MLT seminar structure…)

MLT MBA Prep fellows attend three seminars between winter and summer that are focused on helping us craft and refine our stories, learn best practices for applications to school, and learn more about the schools we want to attend. These are the only times that MLT fellows from across the country (and world) are in one place for one common goal.

When I got back from the seminar, it was time to move from Oakland, CA to Los Angeles, CA (technically Long Beach) for work. Let me tell you… I think this was the toughest part of my year emotionally. Being that I wasn’t ready to leave the Bay, being moved away from the support system I had built over the past 2.5 years was extremely difficult. Things worked out in the end (I would end up traveling to the Bay 2x/month or more until I moved for business school) but the adjustment required some time.

Now I was in the full swing of things with MLT. In addition to my job and studying for a higher GMAT score (my new goal was 700+), we had monthly MLT homework assignments that were extremely involved. Each month’s assignment covered career discovery (determining what career you were looking to pursue through business school), school preferences (determining what we wanted in a business school program), and crafting our individual stories (our past, school choice, and desired careers all fit together). I don’t think I was a very reflective person up until this point, but MLT required that I change that.

I also began to form some strong relationships with fellow MLTers during this month. That was helpful because I gained accountability buddies as well as very close friends. When I would visit the Bay Area, I was able to take advantage of the awesome office spaces many of my fellow fellows had access to, making the preparation phase a bit more enjoyable.

During May I became excited about a particular school. I visited an MBA program’s diversity day and was blown away by what I learned and saw. When I applied to college for my Bachelors, I only applied to three schools and visited one (U of I – the school I ended up attending). For my MBA, I was required (by myself, MLT, and the way of admissions) to do things differently. This school was the first one I’d visited on my own and I fell in L O V E with everything they had to say. It seemed like everything I saw sparkled. The city was cool, the campus was vibrant, and the students of color were all spectacular. This would begin a long process of getting to know the ins and outs of that program (including professors, students, and alumni) all for getting my application (which would be submitted in Fall) to the interview stage. It was game on.

I also continued to work on developing professionally at work and keeping up with all things MLT.

Yall, this was a summer! Everything was busy! I took the GMAT again, got a 700, and doubled down on making sure the rest of my application components were together. I also spent a lot of time traveling for work and to MLT seminars. By the beginning of August, I thought I was ready for application season, but then things got interesting.

I was dating a guy, then I was not dating a guy. The gag was, he was my right hand through this process. SO I put my big girl pants on and prepared to do the rest of this sans accountability partner (no big deal). Then, on the same day, my 1-year old car was totaled by someone who did not understand that red lights meant stop. This unfortunate day rattled the rest of my August and caused me to endure a lot of stress I was not prepared for. This also kicked off what felt like my season of rejection.

I turned 27 in Spain (which was awesome) and also decided to take the GMAT once more. A hail-mary, if you will. When I returned to the US, I wrapped up my application to my dream school, and took my fourth and final GMAT a few days later. I ended up with a 710! I also ran out of time to work on any other applications, so I pushed the rest of my school applications to Round 2. I figured, if I got into my dream school, the rest would have been a waste anyway. I wrapped up the month with a trip to the National Black MBA Conference and a solo trip to New York to celebrate the work I had put in.

While helping a friend with their application to my dream school, I got notified that I was selected to interview! I was ecstatic and put all of my energy into preparing for my interview.

I interviewed and thought it went well! The interviewer had nothing but positive things to say, and I finally felt like all the work I had put in paid off. Feeling very good about my odds, I pushed off the rest of my applications. It did not feel like a good use of time to work on applications I would likely/hopefully never submit.

One more visit to my dream school had me feeling like all was right with the world! I just knew I would get good news. Fun fact: when you have been admitted into an MBA program, instead of finding out via email, someone from the school admissions team gives you a phone call to give you the good news. On the day my dream school made calls, I had a 5-hour flight from Ohio to the Bay Area. I was on edge the ENTIRE time. I just knew I was missing my call while in air. I looked forward to landing and checking my voicemail messages. You guys know where this is going right?

I landed, and nothing. No missed calls, no voicemail messages, nothing. What I did get about an hour after landing was an email saying there had been a change in my application. I logged onto the portal and saw the nicest rejection letter. What’s more, the same people who said “no matter what, let’s stay in touch” never even responded to my attempts to close the loop. I was devastated.

What I knew, however, was that devastation could not last. I now had 2 weeks to regroup, pick my confidence out of the trash, and apply to six other schools. This was 6 new applications, 6 sets of essays, 6 sets of recommendations… I had a ton to do. So what did I do? I put my game face on. It was time to work.

That was a lot!

Next time, I’ll wrap up my story and tell you how I overcame some of the worst feelings of rejection, and how I ultimately ended up where I was truly meant to be. In the meantime, if you have any questions, feel free to leave them below.