While I’ll admit I’m not the best versed on politics it wasn’t a shock at all when she announced that she would be running. For many I’m sure her running represents a great deal of hope. For one such Donald Trump and other men with similar thought processes, it represents a chance to joke that that husband’s alleged infidelity makes her unfit to be Commander in Chief. 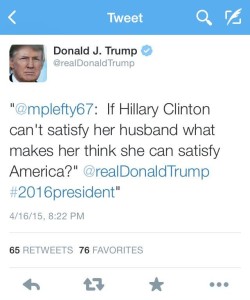 And yet, there are two sides to every coin. On one side we must tackle the obvious sexism that accompanies Hillary Clinton running for POTUS. On the other side, we must hope that while Hillary may think she has the female vote, she can’t forget to acknowledge all women.

Actress Jada Pinkett Smith let it be known her thoughts on her Facebook page as it relates to Clinton. “Hillary’s announcement reminded me that the relationship between black and white women on the political platform has been deeply complicated, disappointing and painful. The only question I have been asking myself is if I’m suppose to vote for Hillary because she is a woman; will she take us to the mountaintop with her or will women of color once again be left out and left behind?” 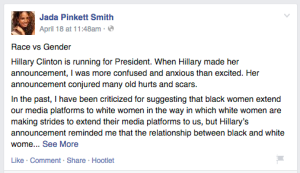 I too as a black woman share Jada’s worry and sentiments because black women certainly do have the voting power to make a significant difference. It’s like that coin again. It takes more than the idea of being the first female President of the United States to run the country. But still it certainly would be exciting.