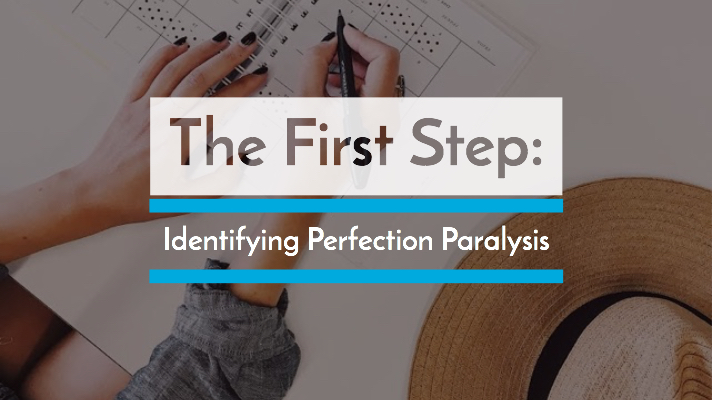 I have the best ideas (if I do say so myself). I can spend hours daydreaming about a business plan. I’ll map the entire plan out in my head, all the way down to branding and partnerships. Sometimes, I’ll even share my plan with a trusted friend, and together our enthusiasm morphs into further brainstorming and perfect pitches. Now, the only thing left to do is start. And, that is where my best ideas go to die: the execution phase. The actual DOING part.

For years I thought it was chronic procrastination. “I’ll do it when I save up the money to do it right.” “I’ll write it when I have the mental capacity to make it worth reading.” “I’ll call about that collaboration when my life is in a better place.” But, after decades of missed opportunities, and similar ideas that someone else thought of, but actually had the guts to make a reality, I began analyzing all the projects I never pursued.

There had to be more to it than just waiting until the last minute.

Over the years, coworkers labeled me a perfectionist. I wore the title like a badge of honor. But, I often heard the term when receiving constructive criticism. As a broadcast producer I struggled to write scripts in a timely manner. I would literally stare at the blank screen, trying to figure out the best way to start nearly every story. “Just write,” was often the advice my anchors would offer when I asked how I could improve.

“You can’t make anything better if there’s nothing to edit.”

But it wasn’t that easy for me. I would literally freeze. This is my reaction for so many of my endeavors that could’ve been but never were— stuck trying to make it perfect before I ever had anything to improve upon.

I was recently introduced to the term perfection paralysis. It is “a trick your mind plays on you in an attempt to keep you safe. Whenever you are about to put a piece of yourself into the world (say by starting a new business or asking someone out on a date) you form an idea of it in your mind first.

I was gobsmacked. It all made sense. Yes, I am a procrastinator, but at the root of that is not my laziness (to which I often attribute my lack of efforts), but my very real fear of my pursuits not being right…being PERFECT. Reading article after article about perfection paralysis and how to overcome it became empowering—at first. Then it quickly became overwhelming. Suddenly, I wanted to do it all, all right now…and I was determined to make everything a success and…back to square one, I was- making the perfect plan with no start date in sight.

I realize this is going to be a process. A potentially long, uncomfortable and challenging process. But, I’ve identified projects that will force me to do the work I’ve only dreamed about—on a smaller scale, for now. I’m working on building up my confidence…which in itself is a large part of perfection paralysis, but at least now, I’m actually DOING and not simply daydreaming. And while I understand it won’t be perfect…immediately, I’ll work on making it better once I finally get something down on paper.

For those who want to get started along with me, here’s a link to the article that’s essentially been my Recovering Perfectionist Bible. It’s been quite helpful.

Continue to strive for greatness in all your pursuits