The Moral Victory: A Life Lesson from the Texas 2018 Midterm Election 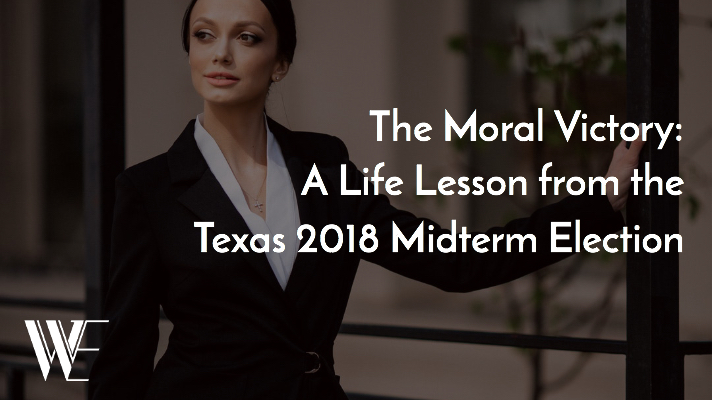 The 2018 mid-term election cycle was more than the latest political circus to capture our attention. While some would argue it was a referendum on the Trump Administration, the number of historic campaigns we saw were more than a pure litmus test. I’ve chosen to highlight Congressman Beto O’Rourke’s near victory and the associated blue wave that swept Harris County. Beto’s race demonstrates the value of “the moral victory”.

Beto’s months leading up to November 2018 were filled with stops in all 254 counties in Texas. Beto’s speeches about NFL players taking a knee and the need for criminal justice reform were cycling social media, talk of Beto refusal to accept corporate or political action committee dollars while out fundraising his opponent filled politico’s lunch hours, and liberal polls ping-ponged two points up and down as the course for a historical win was set. Opposite the aisle, conservative incumbent Ted Cruz accepted two televised debated against the Congressman, leading many to believe the seating Senator felt intimidation and a possible loss of his seat. Yet, November 6, 2018, albeit later than usual CBS was the first to call Cruz wins the Texas Senate Seat. O’Rourke graciously conceded and his historical run came to a failing end, or was it?

While Beto didn’t meet success in the manner he’d hoped, the morning of November 7th proved his race would be life changing for both the Democratic and Republican parties in Harris County and across Texas. Focusing on Harris County:  the Democrats swept all county-wide positions, including all judge seats. They now control Commissioners Court 3-2, shifting the dynamic of power and unseating long-time Harris County Republican Judge Ed Emmitt, and electing first-time, little-known candidate Lina Hidalgo. O’Rourke loss by less than 3% statewide, but his name at the top of the ticket along with straight ticket voting ushered in more than 20 candidates that may not have won otherwise.

To date, many liberals are posting Beto 2020 envisioning what the next Presidential ticket should be. Although he did not win his state, a key measure of determining a candidate’s prospects for the Presidency, the Congressman did experience the moral victory of running his race at a pace that impacted the trajectory of everyone around him. The results of his political goals and strategy reached far beyond his own race, ultimately changing the face of power and decision making in Texas. Let’s be clear: a Senate win for Beto is what the Congressman desired. But, his pace in 2018 garnered a moral victory for not only his party but his would-be constituents. They will be served at multiple levels of government, reaching beyond the scope of work the one Senator could accomplish.

As you begin to develop your 2019 vison boards and lay your blue prints to execute those strategies, I’d urge you to keep in mind there is more than “win or lose”. If by chance you meet failure at the end, look for the moral victory you may have created. Perhaps even be mindful along the way for opportunities to create victory for others by design.

We go further together!