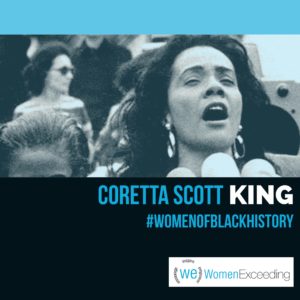 Coretta Scott King was a civil rights pioneer, author and wife to Martin Luther King Jr. Scott King was a prominent figure in the Civil Rights and Women’s Rights Movement as an advisor to our nation’s leaders and an advocate for her late husband’s causes. A little known fact about Scott King is that she was a singer and often incorporated music in her civil rights work. While Scott King spent many of her years preserving her husbands legacy, institutions of higher education and organizations with similar causes made sure to recognize her legacy as well. She received honorary degrees from many institutions, including Princeton University, Duke University, and Bates College. She also received the Four Freedom Award for the Freedom of Worship, a Candace Award for Distinguished Service from the National Coalition of 100 Black Women, the Academy of Achievement’s Golden Plate Award and also, the Gandhi Peace Prize by the Government of India. “Struggle is a never ending process. Freedom is never really won, you earn it and win it in every generation.” – Coretta Scott King #WOMENOFBLACKHISTORY #BLACKHISTORYMONTH