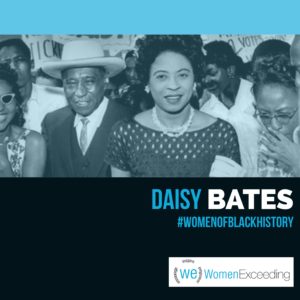 Daisy Bates was an American Civil rights activist who led the Little Rock Inegration Crisis, after African American students were prevented from entering racially segregated schools. Bates grew up in Arkansas and was a member of the Little Rock NAACP. After Brown V. Board, Bates began to focus mostly on education. Bates was also a journalist and published a local black newspaper, the Arkansas State Press which publicized violations of the Supreme Court’s desegregation rulings. Bates was named Woman of the Year in 1957 by the National Council of Negro Women and she is an honorary member of Delta Sigma Theta Sorority, Inc. Posthumously, she was awarded the Congressional Gold Medal by President Bill Clinton along with other members of the Little Rock Nine in November 1999. #WOMENOFBLACKHISTORY #BLACKHISTORYMONTH