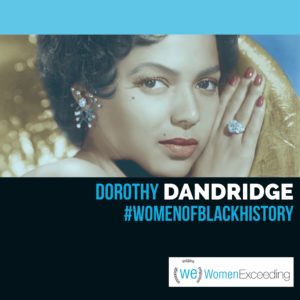 Dorothy Jean Dandridge was the first African-American actress to be nominated for an Academy Award for Best Actress. At the height of her career, Dandridge could perform at the most exclusive venues in the country, but because of segregation, could not sit in the audience nor stay in the hotels. Dandridge rose above Hollywood’s typecasting for African American women and changed cinema forever. The actress, singer and dancer was given a star on the Hollywood Walk of Fame as well as a statue in Los Angeles to honor the trail she blazed for leading ladies of color in cinema. Dandridge’s legacy has continued to be acknowledged by the entertainment industry’s African American actresses, such as Cicely Tyson, Jada Pinkett Smith, Whitney Houston and most notably, Halle Berry in her tearful, powerful Academy Award for Best Actress acceptance speech in 2002.