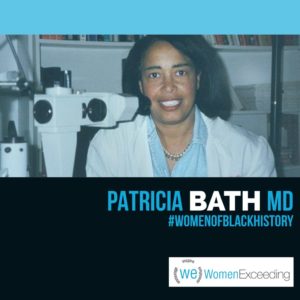 Dr. Patricia Bath is an American inventor, ophthalmologist and academic who has been a blazer the trail for women and African Americans in her field. Bath is the first woman to have served on the staff of the Jules Stein Eye Institute, the first women to have headed a post-graduate training program in ophthalmology and the first woman elected to honorary staff of the UCLA Med Center. Bath was the first African American to served as a resident in ophthalmology at NYU and the first African American woman to serve on staff as a surgeon at UCLA Med Center. Bath, a holder of four patents,is the first African American woman doctor to receive a patent for a medical purpose. She also founded the company of the American Institute for the Prevention of Blindness in Washington, D.C. Bath is most known for her discovery and invention of a new device and technique for cataract surgery in 1986. It is known as laserphaco. “Believe in the power of truth… Do not allow your mind to be imprisoned by majority thinking. Remember that the limits of science are not the limits of imagination.”
-Dr. Patricia Bath