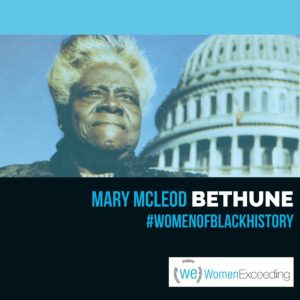 Mary McLeod Bethune was an educator, civil rights activist, served as the president of the National Association of Colored Women and founded the National Council of Negro Women. A child of former slaves, McLeod Bethune graduated from the Scotia Seminary for Girls in 1893. She founded the Daytona Normal and Industrial Institute in 1904, which later became Bethune-Cookman College. This effort aligned with her belief that education was the key to racial advancement. McLeod Bethune was an adviser to President Franklin D. Roosevelt and was known as “The First Lady of The Struggle” because of her commitment to civil rights. “The drums of Africa still beat in my heart. They will not let me rest while there is a single Negro boy or girl without a chance to prove his worth.” – Mary McLeod Bethune #WOMENOFBLACKHISTORY #BLACKHISTORYMONTH