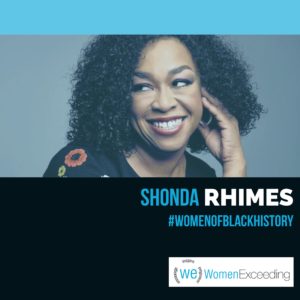 Shonda Rhimes is an American television producer, screenwriter, creator and author best known for Grey’s Anatomy, Scandal and How to Get Away with Murder. In 2007, Rhimes was named on of TIME magazine’s 100 People Who Help Shape the World. Rhimes has won the Directors Guild of America Award, several NAACP Image Awards, Producers Guild of America Awards, Writers Guild of America Awards and has been nominated for two Emmy Awards. Between 1995 and 2004, Rhimes worked a variety of day jobs while working on several film projects. In 2005, after being turned down once already by ABC for a pilot she wrote, Grey’s Anatomy would debut with Rhimes as the showrunner. This put her on a trajectory that would change her career forever. “Happiness comes from living as you need to, as you want to. As your inner voice tells you to. Happiness comes from being who you actually are instead of who you think you are supposed to be.” – Shonda Rhimes #WOMENOFBLACKHISTORY #BLACKHISTORYMONTH