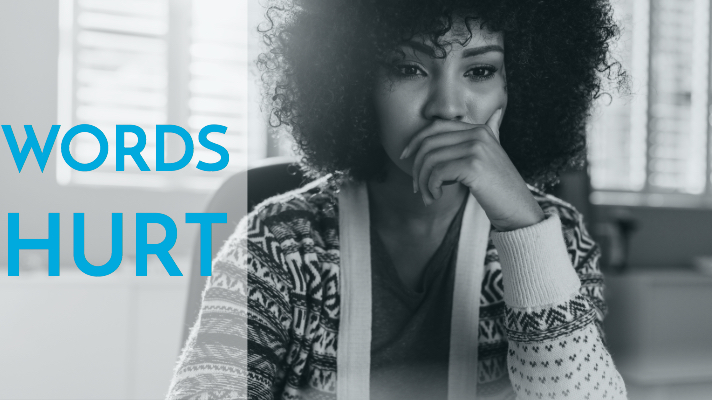 There is an old saying that goes, “sticks and stones may break my bones but words can never hurt me.” This saying in its origin was a response to verbal bullying in adolescence. From a young age, we are taught that no matter what a bully says to us, no matter what names they call us, they cannot hurt us, because words are just words. What happens when these “words” are said to you by someone you love, someone that is supposed to love you and they do in fact hurt?

I was one of those people who always thought abuse would never happen to me. Even when faced with abuse, I could not recognize it as such. No one was hitting me, no one was physically forcing me to stay or do anything beyond my control, so everything was fine, right? Everything was not fine. While he did not physically force me to stay, if I wanted to leave he would say things like, “There is no way you would ever find anyone that loves you the way I do.” If I wanted to go out with girlfriends, I was every unspeakable name in and out of the dictionary. If I would not do what he wanted, he would threaten to leave me and sleep with my best friend. If I did something he did not like, he would threaten to release private pictures I sent to him. As time passed, the threats escalated to him threatening to have one of his female friends beat me up. He still did not hit me physically, so should I think of it as abuse? The answer is yes. Despite the old saying from above, words do hurt.

Thankfully we have grown as a society and have been able to recognize 5 other types of abuse in addition to physical. The types of abuse other than physical include: physical, verbal, mental, sexual, financial, and cultural. Each type of abuse can be just as harmful as any other as they all are known to cause depression, anxiety, low self-esteem, PTSD, drug abuse, eating disorders, obesity, physical and mental health issues, and death. Abuse is often about control. When an abuser feels as though they have lost control, they try to regain it in the form of abuse. If one method no longer works, the abuse can escalate. It is important to recognize all types of abuse, as physical abuse is often the last form of abuse and is an escalation of the other types of abuse prior.

As victims of any type of abuse, we begin to blame ourselves for putting up with the abuse. We question what we were thinking and how we could get to this point. I like to think of myself as a strong woman but I look back and do not recognize the person I was then. I was embarrassed and ashamed. The truth is if our abusers walked around with a sign on their forehead that read, “Abuser” or if there weren’t good times pre-abuse, we wouldn’t be in this position. Our abusers often make it seem as though it is our fault, saying things like, “If you didn’t, then I wouldn’t…” Then like a ripple effect, we ask ourselves, “Well maybe if I didn’t do this or didn’t do that then maybe he wouldn’t?”. This is false. It is not your fault as the abused, the abuser is the problem and truthfully, the reason you are abused has nothing to do with you and everything to do with them.

While I understand why the saying “sticks and stones may break my bones but words will never hurt me” was originated as a method to teach children to ignore name calling, the reality is whether it is a bully or the love of our life, words can hurt. More women have experienced verbal abuse and mental abuse than physical abuse by their partners. We cannot, nor should we simply ignore verbal or mental abuse. We must recognize the abuse, remove ourselves from the abusive situation, and seek emotional support.